About Us
Strategic Plan

Students Explore Examples of Courage in Expeditions to Washington

12/6/2019
More than 300 EHS students fanned out across Washington on Wednesday for the School’s first Portrait of a Graduate Expedition Day, an exploration of the metro area as well as the personal qualities of intellectual and moral courage that are integral to the Episcopal's mission.
The half-day event for the 10th through 12th grades was one of several programs piloted by the McCain-Ravenel Center for Intellectual and Moral Courage, a new School initiative that seeks to integrate signature EHS programs, such as its Washington Program and its Leadership and Ethics Program, and deepen teaching and learning.
Throughout the year, the center will create outside-the-classroom opportunities for students to explore the personal qualities outlined in the EHS Portrait of a Graduate — qualities such as service to others, intellectual curiosity, and integrity.
“We want grit, we want resilience, and we want kindness and humility in our students,” says Jeremy Goldstein, executive director of the center. “We want the Portrait of a Graduate qualities to be exercised, but we can’t just talk about it conceptually. We have to set up opportunities for it to happen.”
The half-day program began at lunch, when advisory groups gathered for the big reveal of their afternoon destination. The McCain-Ravenel leadership team assigned groups to travel to memorials, museums, cultural hotspots, and other destinations that are less well-known than popular tourist attractions. Among the 24 sites were the National 9/11 Pentagon Memorial, the African American Civil War Museum, the Albert Einstein Memorial, and the Friendship Archway in Washington’s Chinatown.
Faculty accompanied each group, but students led the expeditions and the resulting reflections, with each group mapping and organizing its journey on DC's Metro system. Groups then posted a photo and short text on social media that summarized their trip and learning. Advisories will meet next week to reflect more on their trips and the Portrait of a Graduate qualities.
Two advisory groups made their way to the U.S. Air Force Memorial, which was built in 2006 on a hill in Arlington, Va., overlooking the Pentagon and Washington. The memorial’s three soaring steel spires represent the military branch’s three core values — integrity, service, and excellence — which strongly echo EHS portrait qualities.
Other groups visited historic Howard Theater, which opened in 1910 and became an African American cultural hub showcasing talents such as Duke Ellington, B.B. King, and Ella Fitzgerald. Students in arts teacher Mark Carter’s advisory noted the theater’s embrace of performers from all walks of life, saying in its post, “This is an incredible example of inclusive leadership.”

Two groups visited the Japanese American Memorial to Patriotism During World War II, which focuses on the internment of Japanese in the United States. It features a 14-foot statue of two Japanese cranes caught in barbed wire. Students were struck by the memorial and one of its inscriptions, which draws from the apology offered by President Reagan to Japanese Americans in 1988: “Here we admit a wrong.” The Portrait of a Graduate, they said in their text, notes that it takes courage to admit mistakes and learn from them. 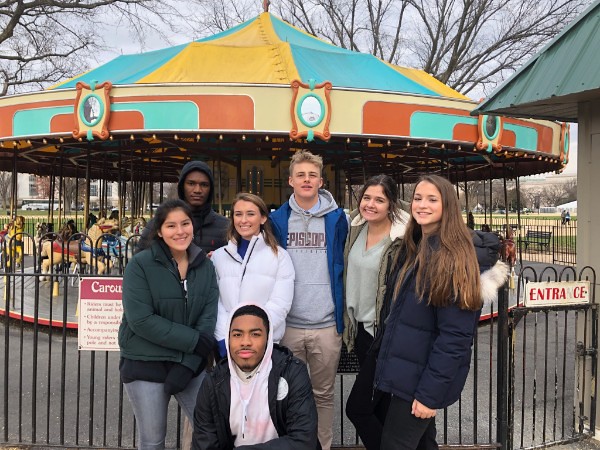